Breaking the Cycle of Stinking Thinking

admin Roll Up Your Sleeves

I used to dread mornings.
I would wake up feeling as if I had no rest the night before and had no energy to face the tasks ahead of me for the day. 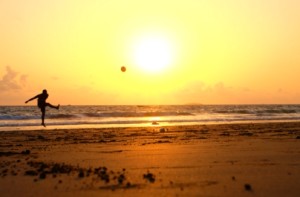 What mainly contributed to this feeling was that I was stuck in an uncreative and depressing cycle.
I was stretched thin between work, family and extra unnecessary commitments. There was very little time to do the things I wanted to do. Nor was I giving my family the proper attention they needed.
I believed that if I worked as hard as I did doing the frustrating, mind numbing chores or things that no one else wanted to do, someone would show up and save me.
A declaration would be made from on high. An awesome demi-god would arrive in my home!
He would declare that I have done everything I needed to do and now time would be set aside so that I could work without a care in the world on the projects I wanted to work on.
My soul would be filled with joy, inspiration and boundless energy would flow from me as I wrote scripts and filmed movies and drew pictures and played guitar and piano.
Money would flow in and I wouldn’t have a care in the world.

That’s not how it works.

I was waiting for permission to do the work I wanted to do.
But no one had the authority to give me permission. I was the only one who could do it.
Unfortunately I was completely depleted.
I had nothing left.
So day after day I woke up defeated.

I broke the cycle. It’s a long story. One I’ll share at another time. The short version of it was I needed help. I did it by opening my mouth and telling my wife what was wrong, then a therapist, then groups, then a support system of trusted friends.
I learned new techniques.
I started listening to and reading Dave Ramsey, Dan Miller, Michael Hyatt, Steven Pressfield, Jon Acuff, Fr. Robert Barron, Rick Warren, Joyce Meyer. I started allowing God into my soul and into my mind.

I did it because I’d had enough. I wasn’t living. I was slowly dying and I didn’t want to do that anymore.

Things have changed for me. I have a regular morning routine. I’ve lost weight. I’ve stopped drinking.
It’s not heaven, but it’s not the hell I was living with in between my ears.

What was a turning point for you? Are you ready to break a cycle of stinking thinking and behavior?

Roll Up Your Sleeves

Doing What You Don’t Want To Do

Inspiration, Roll Up Your Sleeves